Protect your alfalfa investment: Management tools that minimize the risk of alfalfa winterkill

Like any crop, planting an alfalfa field involves a substantial investment. An investment in terms of land preparation, labor, fertilizer, seed, and the expense involved to get the alfalfa stand established and productive. All this comes with the grower’s expectation that this investment will provide forage for 3-5 years. Sometimes a severe winter can result in production losses and in some cases complete stand losses due to winterkill. This can result in lost revenue and subsequent replanting costs to replace the lost production.

Not all alfalfa winterkill can be prevented. However, there are several management tools available to the alfalfa producer. These tools can help reduce the risk of winter injury and/or the severity of the stand loss due to winterkill. The following are some management options to consider when growing alfalfa in production regions that are prone to alfalfa winterkill.

Selecting an alfalfa variety adapted to your production region is critical. Beyond selecting a variety for disease resistance, pest resistance, and desirable agronomic traits, there are two main varietal factors that should be first considered. These varietal traits are the Fall Dormancy Rating (FDR) and the Winter Survival Rating (WSR). If used together in variety selection they can increase yield potential while reducing the risk of winterkill.

For years producers selected alfalfa varieties for winter survival based solely on their FDR (1-10). The lower the varieties FDR number the less fall growth. This “fall dormancy” protected plant root reserves by allowing the plants to avoid repeated topgrowth losses due to fall freezing. These varieties with lower Fall Dormancy Ratings however tended to have less yield potential in contrast to the higher the FDR varieties which had more growth in the spring and fall.

States in the northern tier of the U.S. or high elevation regions have historically used alfalfa varieties with FDRs of 2, 3, and 4. However, in recent years there has been a trend by producers to plant a higher Fall Dormancy (i.e., FD 4 vs 3 or FD 5 vs 4) to gain yield potential. These higher dormancy varieties are now being selected combining the FDR with a low WSR value of 2.3 or lower. This practice gives some assurance of adequate winter survival and capture higher yields. 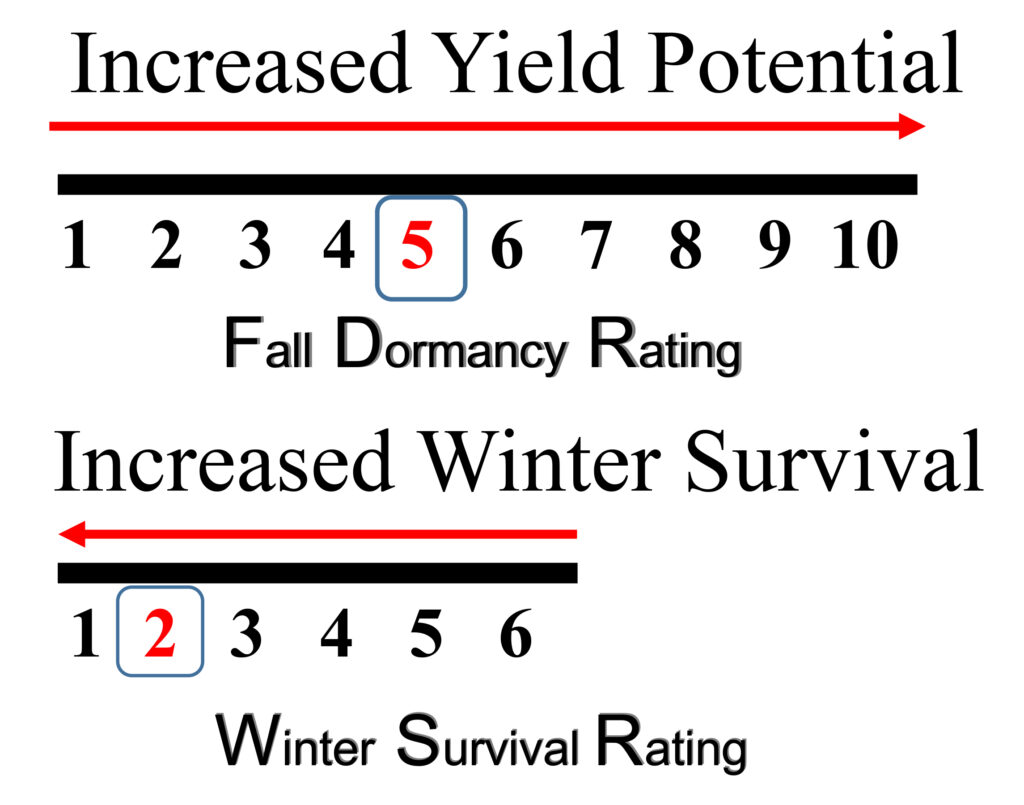 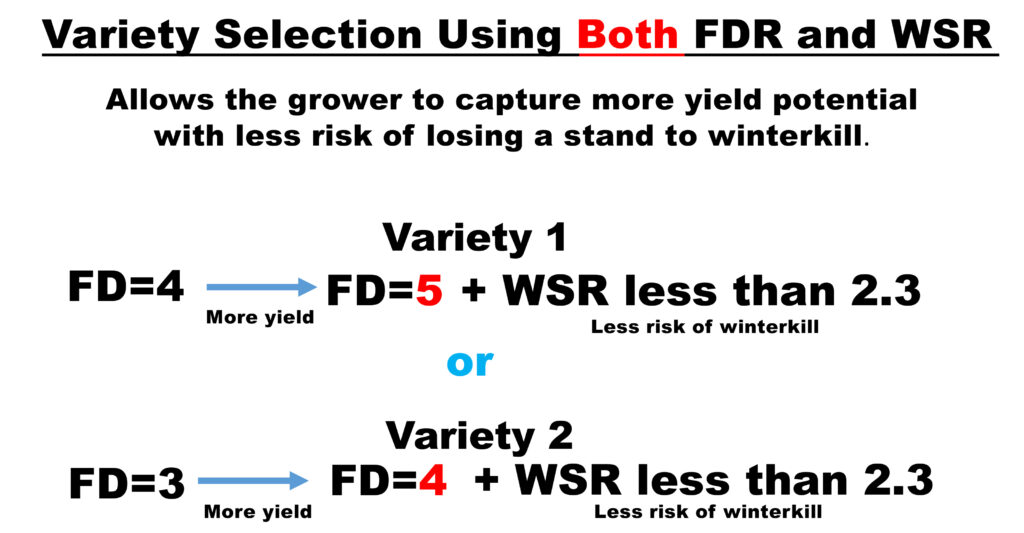 Figure 2. Producers that want to reduce the risk of winterkill regardless of the Fall Dormancy Rating, should only plant alfalfa varieties with a Winter Survival Rating < 2.3.

Whether you plant alfalfa in the spring or fall there are certain precautions you should take to make sure winter conditions don’t damage your new planting.

Spring planting: Alfalfa is relatively tolerant to cold temperatures as it germinates. Therefore, it is generally considered relatively safe to plant alfalfa any time after the fear of frost has passed. However, as it starts to grow and enters into the second trifoliate leaf stage, the plants tolerance to cold injury declines and is more susceptible to a late spring frost. If freezing damage occurs in a new planting, the damaged field can be replanted without fear of autotoxicity anytime within the first year.

Fall planting: Some regions of the U.S. prefer late summer/early fall plantings of alfalfa. This avoids many annual weed problems and allows the stand to establishment enough in the fall to provide a full production year the following spring.

The main thing to remember about fall plantings is to plant 5-6 weeks before the historical killing frost date: This will allow the plants to have enough growth to minimize the risk of winterkill. 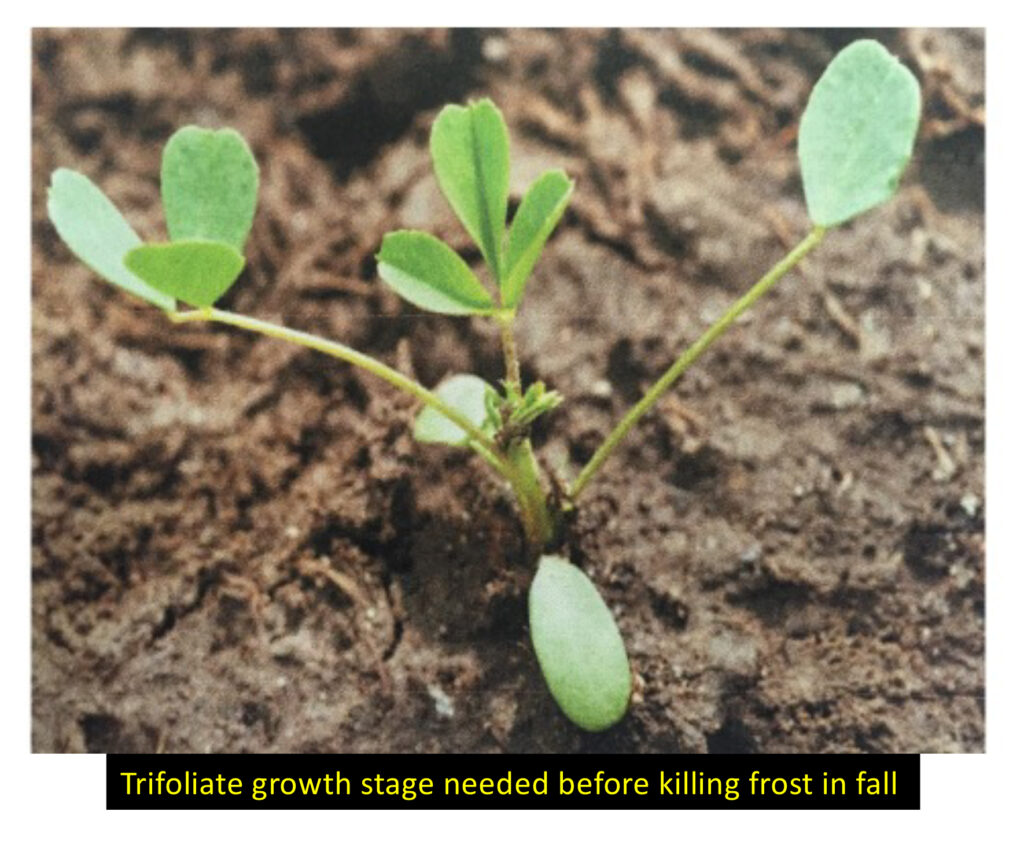 We can’t control the weather. Some years the potential for alfalfa winter injury to an established alfalfa stand does exist. Alfalfa under most conditions is a very durable crop. However, under the right conditions can suffer significant winter damage. Often the damage is due to the severity of the winter. In some cases our management decisions and/or harvest schedules can be a contributing factor. You can use some management tips to “Winterize Your Alfalfa” and give it the best chance of surviving harsh winter conditions.

Two major factors can contribute to winter injury and/or winterkill in alfalfa fields. The most obvious is severe winter weather, and the second is crop management during the growing season.

The following is a description of those conditions and some management tips that have been shown to minimize the potential winterkill risk related to each factor.

Management Tips: During the Growing Season

Any practice that increases plant stress can affect the alfalfa’s ability to survive harsh winter conditions. The following is a list of stress factors and some management tips to minimize the risk of winter injury and/or winterkill.

Variety selection and what you do during the growing season can greatly affect the ability of your alfalfa stand to avoid winter injury. Properly managing plant stresses and alfalfa root reserves throughout the season can pay big dividends to producers in the form of improved quality, yield, and stand life. The timing of the last cut is probably the most important factor in preventing winterkill.