Alfalfa producers are well aware that selecting the optimal variety for their region is critical to the economic success of their farming operation. When you talk to growers, yield potential is always at the top of their list for variety selection. However, in northern regions, selecting a variety with adequate winter survival is a close second. According to the 2022 National Alfalfa & Forage Alliance (NAFA) variety list, there are approximately 178 alfalfa varieties marketed in the United States. Each has its own list of agronomic traits which may include; yield potential, winter survival, improved forage quality, increased pest & disease resistance, and/or a wide array of many other desirable traits. Not every variety is adapted to grow in every region of the United States however, regardless of how desirable a specific trait or traits is to the grower. The first criteria to use in selecting a variety is whether or not the variety is adapted to a region’s climate and/or elevation. For example, if a Wisconsin’s farmer’s high yielding variety choice didn’t survive the first winter, then it was a poor choice for his farm despite any other desirable traits it might have had. Two alfalfa rating systems, Fall Dormancy Rating (FDR) and Winter Survival Rating (WSR) can be used as tools to help in the selection of varieties with high yield potential as well as less risk of winter kill through the winter survival rating.

When alfalfa was first introduced into North America, farmers growing alfalfa in northern areas of the U.S. noticed that some alfalfas were prone to winterkill and some were not. Varieties that evolved in cold climates responded to fall’s shortening daylength and cooling temperatures by reducing their fall growth. In contrast, varieties obtained from warmer climates continued to grow in the fall. These varieties we not genetically programmed over time to respond to short days and/or cold temperatures that occurred in more northern latitudes. These varieties experienced repeated frost damage and often winterkilled as a result of the added plant stress. Eventually plant breeders used this “Fall Dormancy” observation to develop the Fall Dormancy Rating (FDR) system. This system estimated winter survival using the amount of fall growth as an indicator. The FDR system subdivided alfalfa varieties into ten dormancy groups. These groups were based on their Fall Growth Response to the shortening fall daylength and/or cooling temperatures. Varietal differences were based on average plant heights in comparison to 10 standard check varieties (Figure 1). A rating of 1 was given to varieties displaying the most fall dormancy (shortest height). A rating of 10 was given to those varieties with the least fall dormancy (tallest). Varieties with a lower number rating were considered to be more winter hardy and better adapted to cold climates. The national list of Alfalfa varieties, published each year by NAFA, groups all commercial varieties by this Fall Dormancy Rating (Figure 2). 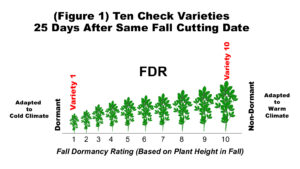 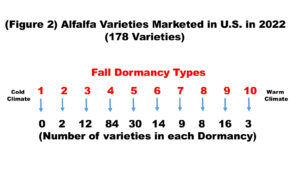 For many years, this “Fall Dormancy Rating” was a useful tool for researchers and farmers in estimating the winter survival and/or adaptation of varieties to cold or hot climates. However, this system did have its limitations and drawbacks. Winter survival was estimated solely on a varieties survival mechanism of conserving food reserves. The plants reserved food by reducing fall growth and not on actual winter survival performance data.

In addition of using FDR as a tool to estimate winter survival, alfalfa researchers have known for years that factors associated with higher yields (vigor, fast regrowth, and extended fall and spring growth) increased as you moved up the fall dormancy rating scale from 1-10. Farmers and researchers often saw the extra yield potential of a FD 5 over a FD 4 or a FD 4 over a FD 3. They were at a loss of how to capture that yield without risking winterkill. As a result growers were often conservative in their selection of a variety based on FDR. If a farmer was raising a FD 4 and experienced severe winterkill, the next time the grower planted alfalfa he planted a FD 3 (Figure 3).  High yield potential, less dormant varieties were overlooked in this selection method due to the uncertainty of their actual ability to survive a harsh winter and winterkill. 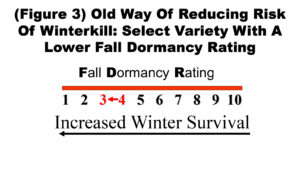 The 2022 Alfalfa variety list currently has 84 varieties classified as FDR=4. Although all 84 varieties fall growth habit (plant height) were statistically the same, some of the varieties demonstrated actual winter survival as good as or better than varieties rated with a FDR of 2. This discrepancy prompted the development of the more accurate rating now called the Winter Survival Rating (WSR). This new rating gave growers an additional tool to more accurately estimate winter survival with a rating based on a direct spring measurement of winter survival vs the indirect estimate based on fall growth used by the FDR. The Winter Survival Rating (WSR) was added to varietal characteristics in the NAFA national alfalfa variety list in 2010.

The Fall Dormancy Rating (FDR) utilized a variety’s amount of fall growth as an indirect means of predicting winter survival. In contrast, the relatively new Winter Survival Rating (WSR) directly measured a varieties survival following severe winter conditions. The rating uses a scale of 1-6 (Figure 4). The WSR’s direct measurement of actual winter survival provided a more accurate winter survival estimate than FDR. The lower the WSR number, the better the winter survival. A rating of 2 or lower is considered to have adequate winter survival for most northern regions of the U.S. Choosing a variety with a WSR in the 1 range further reduced the risk of winterkill in regions with the most severe winter environments.  the national list publishes the WSR as whole numbers. However, some proprietary companies will actually publish the calculated numerical rating instead of rounding the number. If fractional WSR numbers are available, a WSR less than < 2.4 is considered to have good winter survival. In the most severe winter environments a WSR of <2 should be considered. 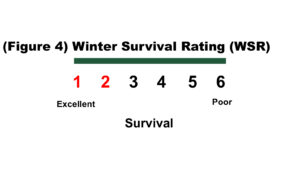 Now armed with WSR’s direct measurement of winter survival, growers can now feel more confident in selecting a less dormant variety with increased yield potential (i.e. FD5 vs FD4 or FD4 vs FD3). The grower can take advantage of the increased yield potential of a less dormant variety, but feel confident that if he also makes sure that variety has a low WSR number (< 2), he can significantly reduce his risk of winterkill (Figures 5 & 6). 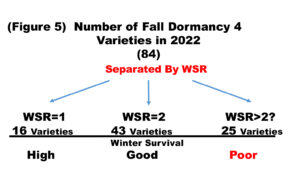 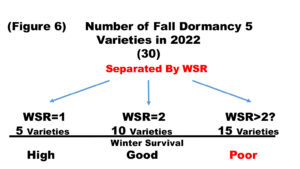 During variety selection process, growers should initially make a list of all the varieties with the recommended optimal Winter Survival Rating (WSR) for their location. Farms in the North Central Region generally require a minimum recommended value for a WSR of 1-2. Next the grower narrows the list for varieties with a higher Fall Dormancy Rating (FDR) for increased yield potential. For example, a farmer that normally uses a FDR= 4 might choose a variety with a FDR=5 as long as it has a WSR=2 or 1. In more severe winter areas a farmer that has been using a FD=3 might choose a FDR= 4 with a WSR= 1. The list can then be evaluated for other desirable agronomic trait such as pest resistance, or forage quality before the final variety selection is made.

Numerous alfalfa varieties are currently available to the grower to help him maximize his profits. However, narrowing the list of hundreds of potential varieties to a handful is often difficult. Growers can now initially reduce the list of potential varieties significantly. by using two alfalfa rating systems, Fall Dormancy Rating (FDR) and Winter Survival Rating (WSR). The use of these two ratings together allows the grower to capitalize on the yield potential of less dormant varieties while at the same time minimizing the risk of winterkill (Figures 7 & 8). 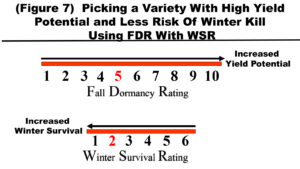 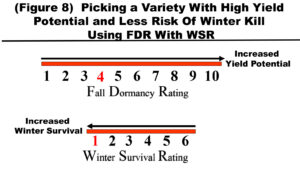