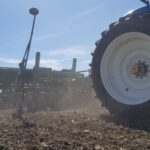 As published in the Kansas Forage and Grassland Council July Newsletter

Spring seeding of alfalfa is often preferred in many regions of the U.S. However, a late summer seeding can be successful if proper management techniques are applied. The following information is a summary of some frequently asked questions (FAQ) and some current university recommendations and guidelines for successful late summer seedings of alfalfa.

When should you consider a late summer seeding of Alfalfa?

What are the advantages of a late summer seeding in alfalfa?

What are the disadvantages or risk associated with late summer plantings?

The standard seeding rate for alfalfa is 15-20 lbs./acre. This rate may vary depending on local conditions. However, the end objective is to have 15-25 plants/sq. foot, 5-6 weeks after planting. Higher than normal planting rates may be required to obtain this initial plant density if soil conditions and/or method of seeding are less than optimal. Lower rates and planting densities may be advisable for dryland or arid climates (8-12 lbs./acre). The recommended seeding depth for alfalfa is 1⁄4 to 1⁄2 inch. However, this may vary depending on soil type and availability of soil moisture.

Adequate soil moisture is needed to allow sufficient growth for establishment before a killing frost and is critical for a late summer planting if supplemental irrigation is not available.

Herbicide requirements for a late summer seeding may be minimal, since annual weeds will be killed by frost. Perennial weeds should be controlled before planting the alfalfa when possible. Control of volunteer small grains may also be required.

The fall growth of a late summer alfalfa seeding should not be harvested. Plants are small and subject to injury at this time. Harvesting the top-growth can be detrimental to winter survival. The first harvest should occur the following spring. Hay production the first year should be similar to that of established alfalfa.