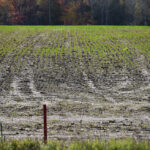 Less Weed Pressure During Establishment and More Hay Next Year

At the start of 2021 western hay stocks were down significantly with Kansas hay stocks reported to be 36% lower than last year. The USDA also estimated that in 2021 Kansas would see a 1% reduction in hay acres, or 40,000 less acres. These factors combined with the ongoing drought could have a significant effect on 2022 hay stocks and prices.

Producers that want to be in position to fully capitalize on the potential higher alfalfa hay prices may want to consider a fall planting of alfalfa. The advantage of this planting is the potential of having hay sooner in the spring when prices are high, and more to sell if prices do rise significantly in the coming year.

If adequate rainfall or irrigation is available for a fall planting, alfalfa producers may want to consider planting in the fall versus waiting till next spring. There are several advantages to consider over a spring planting that can contribute to reduced costs, higher yields and potentially higher profits in today’s market. The two main factors are:

The following link lists some of the main advantages of planting alfalfa this fall versus waiting till next spring.

Fall seedings have the advantage of a longer establishment period and therefore are capable of full production the coming growing season. When you compare this additional tonnage to that of a spring seeding, the additional revenue can be significant.

One of the main reasons why fall seedings can sometimes be more successful than spring seedings is because there is generally less weed pressure.  With less weeds, the alfalfa seedlings aren’t competing as much for water and soil nutrients. The following list are a few reasons why weed pressure is often less in fall plantings:

If you do decide to try a fall planting of alfalfa, be aware that alfalfa seedings require a minimum growth and establishment period of 6-8 weeks before a killing frost (4 hrs. @ 26º F). Optimal planting dates vary due to each regions historic killing frost date, but the following are some suggested planting dates for Kansas