Dairy Producers in the U.S. continue to increase milk production to higher and higher levels, due in part, to improved animal genetics. However, it should be noted that an elite Dairy cow’s genetic potential can never be fully utilized without access to a high quality feed. Top milk production requires both. Alfalfa breeding to improve leaf-to-stem ratio can help reach these goals.

Historically alfalfa has been an important high quality feed for dairy operations, providing protein, structural fiber, and palatability to the TMR. Despite its reputation for high forage quality, alfalfa can vary from high to low quality for a variety of reasons, making balancing a dairy ration difficult. In the last decade, this quality variation combined with competition of lower cost feeds has resulted in a reduction of the percentage of alfalfa used in dairy rations.

In an effort to enhance the value of alfalfa in the ration, plant breeders have spent the last decade learning what influences forage quality and the plant traits that could be genetically modified to improve the feeding value of alfalfa.  In the case of alfalfa, the whole top growth is fed to the livestock, and the nutrient content and digestibility of its two components, leaves and stems, figure greatly in its feeding value at harvest.  Any reduction in forage quality, separate from harvest related losses, is for the most part attributed to two factors that are related to plant maturity at harvest.  First is a variation in the leaf to stem ratio, and second thedecreasing fiber digestibility of stem tissue during plant maturation.  The ratio of leaves to stems in the alfalfa fed to the livestock greatly affects its forage quality. Thus the adage more leaves = better quality, more stems = less quality. If we take a closer look at the chemical analysis of the plant top growth it soon becomes apparent that most of the feeding advantage of alfalfa is found in the leaves and to a lesser extent in the stems:

Variation in the leaf to stem ratio:

Until recently the most common way to improve leaf content and/ or forage quality was to harvest early. Immature alfalfa has a higher concentration of leaves, higher crude protein and a higher level of dry matter digestibility (DMD). While mature alfalfa is significantly lower in quality with lower CP and less favorable ADF and NDF values. However early harvest sacrificed yield.

The second factor that can effect alfalfa forage quality is stem lignification. As the plant matures the lignin content of the stems increase as a means of supporting plant functions and keeping the top growth from lodging. However with this increase in lignin in the plant tissue also comes a decrease in fiber digestibility. This is reflected in the fact that Acid Detergent Fiber (ADF) and Neutral Detergent Fiber (NDF) values increase with plant maturity.  The increase in lignin content in the plant tissue makes the forage more difficult to digest in the rumen, which it in turn slows down passage and thus animal feed intake, all of which negatively affects milk production.

In regards to improving the leaf to stem ratio, early basic research provided the precise knowledge of what genetic factors influenced the leaf /stem ratios. This knowledge aided alfalfa breeders in developing a breeding technology to improve leaf content. The resulting improved varieties had modified plant architecture with more leaves throughout the plant canopy including the lower stems, increasing the overall leaf percentage, in some cases by 5-8%. This improvement, coupled with an increase in leaf disease resistance, has improved overall leaf content and the leaf/stem ratio at harvest. The second and equally exciting alfalfa breeding innovation has been an improvement in stem digestibility that has resulted in an improved rate and extent of fiber digestibility. Both these factors, the improvement in the leaf/stem ratio and fiber digestibility have significantly improved the forage quality of these new alfalfa varieties, making them more valuable in a dairy ration.

The recent release of high yielding alfalfa varieties with improved fiber digestibility, and more favorable leaf to stem ratios has taken alfalfa forage quality to a higher level. These alfalfa’s still provide the fiber needs of the rumen, but the increased fiber digestibility also significantly contributes to more milk production! Enhanced leaf content also means that alfalfa can now contribute more CP to the ration, reducing the expense of soybean meal protein in the TMR. Depending on the amount of alfalfa in the Dairy ration, these new innovations have the potential of increasing milk production significantly, adding to alfalfa’s value in the Dairy ration. 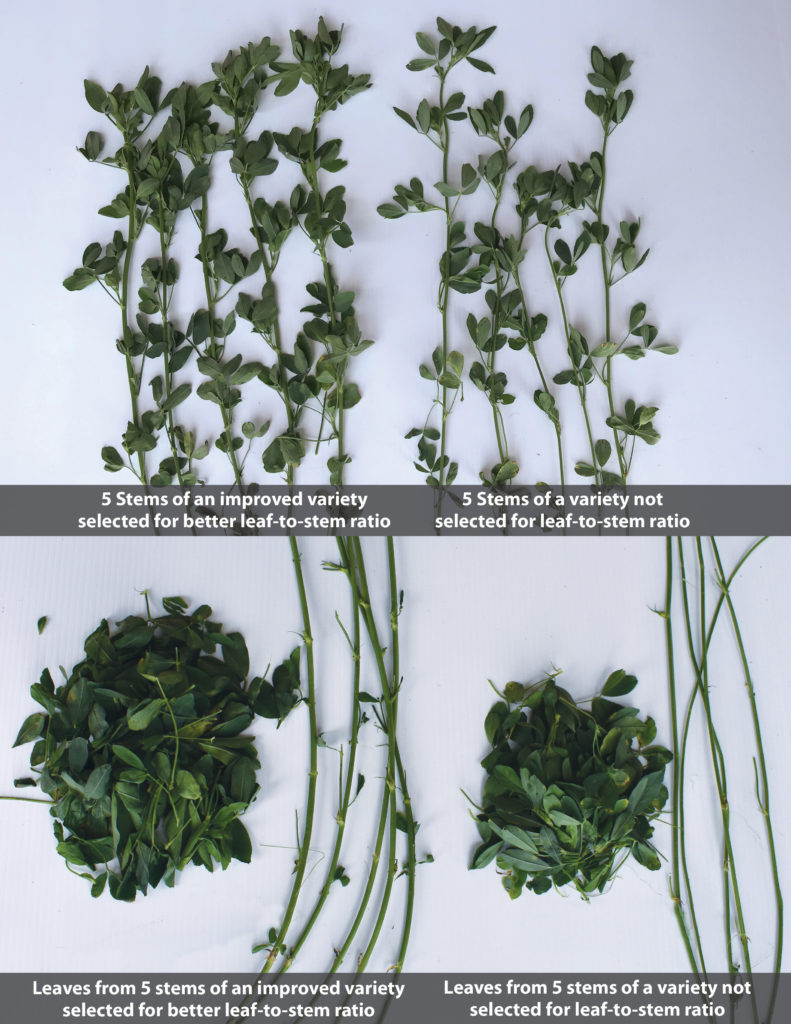